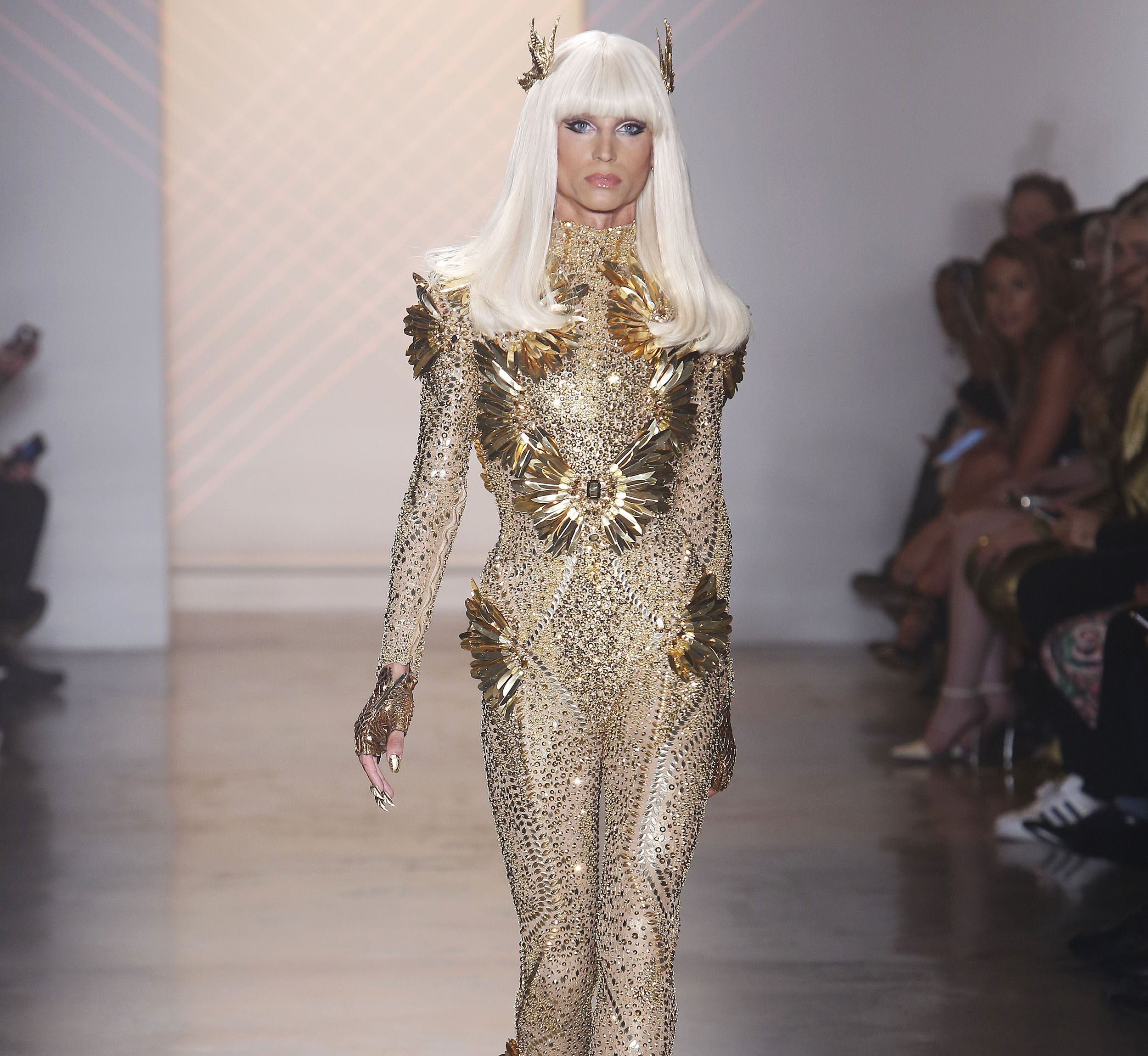 Posted at 20:16h in The Celebrity Wishmaker's Blog by Simo 0 Comments
72 Likes
Share

Imagine the show of shows, the show they all want to see, the one that they’d tear out their hair by the roots to be in the front row. The Blonds. And I was there. And not only that. I also got to go backstage, among the chosen few to interview these very stylists whose epoch-making outfits have graced the likes of Madonna and Lady Gaga and continue to do so, with continually renewed and unfailingly refreshing collections.

At New York Fashion Week 2015 the Spring 2016 Collection will be presented. Every world expert, every die-hard fan will not want to miss this event. The first day, at the Michael Costello show, I saw a very well- dressed elderly lady sitting in front of me. It so happened we’d accompanied her down the stairs and we also took a taxi together. I discovered she was 84 years old; she turned to me and said:

“You’re coming to see the Blonds tomorrow, right? I never miss it.” Well, if she herself says so, I thought, she must be truly exceptional. We got to the Milk Studios on Fifteenth Street, and once past security we took a huge elevator to our floor where the show was already under way. 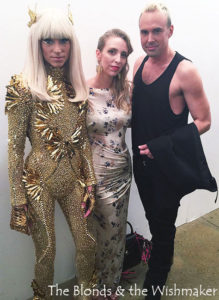 The selected guests were treated to a choreography of colors and music creating one of the most interesting performances I’ve ever seen. What with the celebrities in golden costumes and sequins, I felt I’d been transported back into a film set in old-style New York. In an instant I found myself in a parallel world of gold tones. Fortunately I came prepared, wearing a long dress with a boat neck and split, in a 1940s diva-style, for which I received compliments all evening, a sign that Italian fashion is always noted and appreciated (dress by Gai Mattiolo). “The Wishmaker at The Blonds show video”
Suddenly the lights dimmed and I was catapulted into my very lucky first row. And who should I find next to me? The 84-year-old lady again, wearing a loose jacket of Japanese silk and a blue-feathered hat.

“Ladies in the front row, please uncross your legs!”
It was a voice from the director’s booth.
At that moment 80s-style light beams invaded the stage and I realized that the real show had yet to start. Philippe, one of the design duo, made his grand entrance, beamingly radiant, to thunderous applause from the public. He wore a close-fitting golden suit with metallic feathers, killer heels and a platinum-blonde wig. Then the models came in, all top models of the moment with platinum side-ponytails, highlighting the theme of the collection: GOLD ALL OVER EVERYTHING, EGYPT AND DISCO.

Can you resolve the riddle of the sphinx? This is the stylist’s inspiration as stated in a pamphlet for the guests. Golden clothes bedecked in golden sequins, black and gold studs, precious turquoise stones. Crystals, tight-fitting dresses, mini-dresses and shoes made by the master, Christian Louboutin, with total elegance blended with an excess transforming it into art. Tops that clearly echo feathers and see-through garments with stone inserts that invoke crocodile skin, geometric lines and encrustations, a veritable walking work of art.

The world of fashion all united in the joy of witnessing a work of art, and the final show with models who paraded one after the other leaving us spellbound. The models re-entered and we experienced the trepidation of awaiting the designer duo, who after a moment dashed out to the shouts from the crowd, and once in front of the photographers they stopped and kissed one another lightly, a testimony to equality and also to the great love that their collection exuded.

It was now over, but in reality for me the show was really about to begin.
“Let’s go backstage”, I was told. People were thronging to see the Blonds behind the scenes, but the numerous bodyguards held them back. Then, all of a sudden:

It had already been arranged. They wanted to see me, to meet the Wishmaker. But I didn’t know, right up to that point. And so I had the honor to ask them three questions.

“What was the inspiration for this collection?”
David Blond answered me.

“It was Cleopatra, gold, glitter and more gold. To this we added the disco and the sequins. We tried to draw our inspiration from Egypt and from the disco and we put them together glamour-style. And I see that you’ve dressed for the occasion. Nice suit.”

I could have fainted.

“You’ve dressed so many celebrities such as Madonna and Lady Gaga. Is there one you’d really like to dress?”

“There are so many who inspire us but maybe we’d choose Cher or Diana Ross.”
If you could wish for something for yourselves, humanity or the planet, what would it be?

I put my recorder away in the bag given to me by my designer friend Iaya Asciani, that I’d worn for good luck. Then they had my photo taken with them, something I shall guard jealously, and that I share here with you
After the photo we headed off to a highly exclusive party to which we were invited, and which didn’t skimp on style. A small premises, underground, yet very elegant, which carried on the atmosphere of the show, and where suddenly a trio of rappers of the old school appeared who cast me back to the days of Biggy Smalls and the New York of that day. After an hour’s partying my day had been filled to the brim and I returned to my hotel with a smile on my face and memories that will be hard to forget.

I hope I’ve managed to immerse you in the atmosphere and give you something golden, from the collection I’ll take home in my soul. At the end of the day, fashion, as a great art form, manages to do even this.