The Art of Making an Entrance 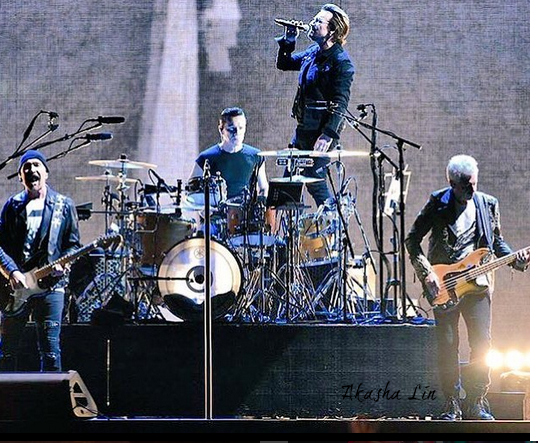 19 Oct The Art of Making an Entrance

The Art of Making an Entrance

“For the furious and the faithful,
to those holding on, and those letting go of
The American Dream. Sing…”
~Bono and U2, The Joshua Tree tour,
in “a city that makes us feel at home, Chicago”

Are you in the furious camp or one of the faithful? Have you decided to hang on to your American Dream? Or sing along if you’re a a U2 fan?

The band U2 is wrapping up their #U2theJosuhaTree2017 tour, and they have played a significant role in my writing since we launched this right just before the tour started.
These travels have even inspired scenes in my travel thriller series.

As Future Entrepreneurs we’re especially interested in finding the best mix of creativity in business. Last week we helped inspire and empower women with #DayoftheGirl, as we aligned with the ONE Campaign and The Global Goals.

Some of our best moments over the last 6 months have been shared with friends as we took in the U2 concert 7 times, in 6 different cities. In 5 cities I went with friends who were experiencing their first U2 concert. The band’s entrance grabs and holds our attention, so they are my timely inspiration on the art of making an entrance.

Yes, as the hashtag says and diehard fans know, this tour is celebrating 30 years of “The Joshua Tree” album; we know they are going to play the album front to back…but not yet…

The lights go down and a silhouette takes the stage and strides confidently from the main stage down the catwalk to the B-stage, surrounded by fans (and shaped like the Joshua Tree for a solid brand and artistic touch). Larry Mullen takes a seat at his drum kit. He looks playfully at the crowd, twirling his drum sticks. And then Larry strikes up the band…familiar guitar notes rise up in step to Edge’s entrance, he looks at the crowd. Just before he reaches the thrust stage, we hear “ohhh oh whoaaa…” from the main stage and all down the catwalk, sparking interest in every corner of the stadium.
It’s the melody of “Sunday Bloody Sunday” as Bono’s voice rings out. Bono gestures with the microphone to the audience and the crowd sings in chorus. Then Adam Clayton, the bassist heads up to join his band mates. He’s serious and cool, but looking out to the audience as he plays. Adam meets the band with a smile on the B (or tree)-stage. Abundant energy for 4 songs out on the stage, then the band walks back to the main stage to create another scene – and in effect a second grand entrance.

See what I mean: https://www.youtube.com/watch?v=tjLkWGO2dM0&feature=youtu.be

(During this anticipation at the Detroit show, my friend Scott turned to me: “Is Bono saving his voice…or why does he keep asking the audience to sing?” I smiled. It’s Scott first U2 concert and we flew in from Chicago to kick off his birthday celebration. I leaned in. “I believe Bono’s inviting us to be a part of the show.”)

The red lights glow bright on the main stage to silhouette the band and the Joshua Tree, from the cover of the album. The mood shifts and the familiar tune takes over the stadium.

Bono raises his arm and confesses…
“I want to run, I want to hide…” from “Where the Street have No Name,” the opening track of “The Joshua Tree”. The area erupts into a massive sing along.
The band members are masters of making an entrance, engaging the audience and leaving strong impression. It’s one of the many reasons we continue to want to share the experience in person!

Stage performers are the corner the market on the art of making an entrance. U2 has been touring for about 35 years, and they have work hard to connect with their audience. Sure, they have a stage crew and an incredible artistic director with Anton Corbijn, the photographer who helped brand U2 in the 80s.

Entrepreneurial Angle
Not a U2 fan, or still mad that they added a free album to your iPhone? Then, take in these ideas with Bono and U2 as entrepreneurs:

Paul David Hewson, commonly known by his stage name ‘Bono’ is a singer, an activist, a peacemaker and philanthropist. The world knows him due to a range of reasons and in each field he is a powerful voice: As lead vocalist of Dublin-based rock band U2, Bono has won record number of awards, which includes 22 Grammy awards from 34 nominations (a record) and the 2003 Golden Globe award for best original song sparking his net worth. Bono is the co-founder of ONE Campaign and (RED); he is a prolific songwriter whose music is known for its politically charged lyrics and socially sensitive theme; he was a nominee for the Nobel Peace Prize in 2003, 2005, and 2006 and was also named as Person of the Year by “Time” in 2005 for his philanthropy and activism, giving his net worth a human touch.

Bono’s net worth is currently listed as $600 million (source: Forbes 2017). He earns his net worth by selling and writing songs and albums, he is a businessman as he owns a vast real estate portfolio and serves on the board of Elevation Partners.
In a speech at Georgetown University, Bono spoke about an intriguing intersection:

“Aid is just a stopgap,” he said. “Commerce [and] entrepreneurial capitalism take more people out of poverty than aid.”

At the Dublin U2 concert, we sat with Bono’s legal team and they mentioned that Bono is now investing in Irish start-up companies and donating 10% of his worth to charity. (As you can tell, I’m very inspired…and I’d gladly take a Dublin start-up pitch meeting and open a business there. Here’s to dreaming out loud, as U2 says!)

Yes, it is possible to be successful as an artist and then cross into other business ventures. Many musicians, whom you might think of as controlling impressions by their ability to perform the piece, control the audience’s reaction to their work by the way they first make their appearance.

Making an entrance is about engaging attention from the start. When an audience’s attention is engaged, they will listen. And they will remain listening as long as you follow it up with valuable content.

We may not all have our Anton Corbijn, but we can get in touch with our artistic side and our brand strengths to make a grand entrance.

I recommend that you focus on connecting with your audience first, before you even open your mouth. When you take the time to take a breath with your listeners and be present with them, you will immediately make an impact and spark their interest. Acknowledging your audience is a simple courtesy and timeless trick that is always appreciated. You don’t have to add a catwalk or enter singing: eye contact, a nod, a smile or an eyebrow raise will do wonders. These gestures take less than a minute. They spark interest, generate credibility, respect and attention.
Prepare to be Remembered

Prepare your next pitch or presentation by asking yourself:
What do I want to be remembered for?
Your answer will determine the clarity with which you deliver your pitch or presentation!
Do you want to be remembered for:
• Being an entertaining and informative speaker that brings joy to a heavy program?
• Your inspiring vision that generates new perspective in your industry?
• Expanding your horizons and influence for new opportunities?
• Continuing until you get a yes from investors?

Being clear about what you want to be remembered for is similar to being clear about your purpose. Both act like a rudder, steering your speech and audience on an impactful journey toward a powerful conclusion.

What You Can Do
1. Put time aside to research practical things like how many people will attend, where you’ll stand, microphones, if you’ll be introduced and what they’ll say, so that you’ll set up your speech confidently from the start.
2. You are “on” as soon as your name is called. Do not slink in, pretending to be lost in intellectual thought or your notes!
3. Roll your shoulders gently back, head and chest up, and take a strong, stable stance with room to move.
4. Establish your physical and energetic presence by taking some breaths with your audience. Try saying this in your mind: “I hear you and I’m with you.” This initial acknowledgement to the audience is memorable in itself because it’s still so rare. And listening to these words in your own voice will add to your authenticity.
5. Practice your speech; include the the timing for your entrance, exit and pauses and your slides or music.
6. Ask friends for feedback and record or film yourself. Are there any flat or confusing moments? Is there too much detail or not enough?
7. Is your message clear and memorable?
To make a long term, memorable impact when you speak, you need to understand and deliver what your audience really wants – connection and value. If you can do these two things, you will spark more interest and engagement.

I am especially grateful for U2 friends who have shared their adventures, and for all my U2 photos that have been shared on Twitter, Facebook and Instagram, by the faithful, the curious and the music lovers. U2 and their social media team do an excellent job of branding their concert and photos by posting many of them on their site in each city. I’ve had that honor as well.

I have a hundred memories that make me smile from these shows travels and one that makes me sad. This was my best artist friend Scott’s last concert. I’m so glad we decided to go to Detroit to share this experience. Though I could end this blog without mentioning this, I am not ready to erase the memory, and true story. Scott and I were both especially inspired as artists after the show and talked about what we were working on. It will serve me well to continue towards those goals that we discussed.
Thank you U2, the concerts have meant a great deal to me…and it brought out the best in him. Scott wrote his last blog, “Beautiful and Moving” about this concert and our trip. He sent it to me when I was at the U2 concert at a reunion with hometown friends in Minneapolis. I told Scott that he’d captured the spirit of the show and that’s I’d love to add his blog to my site…then Scott passed away from a heart attack that night at Six Flags. His blog lives on my website, and was reposted in Cannes, (merci bien, Marcel!) a place we made plans to visit to create artwork in the impressionists’ light. So, I will end on that note: thank you to all my friends helped me through this! The music keeps it alive and I know this will spark sensational things happening on stage!
In San Diego, U2 friends and I enjoyed the close of the U.S. leg of The Joshua Tree tour, and were treated to some special moments, including an acoustic heartfelt version of “You’re the Best Thing About Me.”

What will the best thing about your entrance be? I’ll follow up and share more reactions from entrepreneurs in action.
Thank you for reading and for playing along if you’re not a grand U2 fan. 🙂
We believe in you and your projects.

Congrats on how far you’ve come and keep dreaming out loud with me!