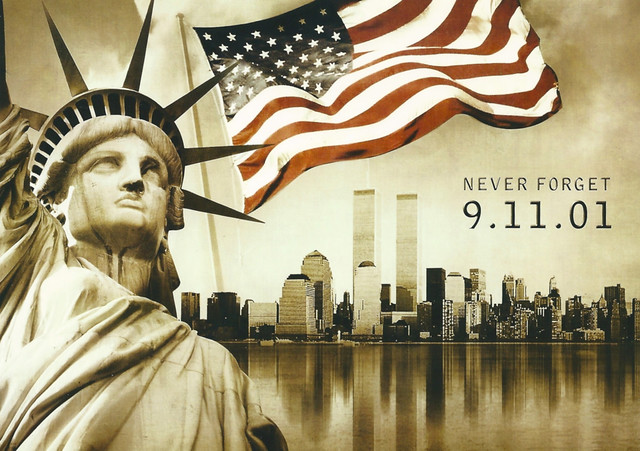 On September 11, 2001, 19 militants associated with the Islamic extremist group al Qaeda hijacked four airplanes and carried out suicide attacks against targets in the United States. Two of the planes were flown into the twin towers of the World Trade Center in New York City, a third plane hit the Pentagon just outside Washington, D.C., and the fourth plane crashed in a field in Shanksville, Pennsylvania. Almost 3,000 people were killed during the 9/11 terrorist attacks, which triggered major U.S. initiatives to combat terrorism.

Now 18 years later, I wish to honor and remember the victims, heroes and survivors of 9/11.
New York City is planning to honor the first responders of the September 11th terror attacks after Congress passed the 9/11 Victim Compensation Fund bill this summer ( https://abcnews.go.com/Politics/senate-votes-make-911-victims-fund-permanent-responders/story?id=64509545 ). The mayor’s office will be working with families, first responders and advocates in the coming weeks “to determine exactly how they prefer to be honored.”
The Fire Department of New York (FDNY) announced the death of the 200th member of the FDNY from World Trade Center related illnesses.

Comedian Jon Stewart, who had lobbied Congress to pass the bill, made a passionate plea to Congress during a hearing on June 11.
“They responded in five seconds,” Stewart told lawmakers at the hearing, referring to police officer, firefighters and other first responders. “They did their jobs with courage grace, tenacity, humility. Eighteen years later, do yours!

Honoring 9/11 United Flight 93 ( https://www.history.com/topics/21st-century/flight-93 )
Eighteen years ago Manal Ezzat fled from the burning Pentagon building in such a panicked rush that her hijab fell off. As fires still burned the next day, Ezzat set to her task of rebuilding. Her vision led to what arose from the ashes: a new use for a site forever marked by tragedy.
Today, at the very spot where the plane piloted by terrorists crashed into the Pentagon, there is a chapel. After the mass murder of 184 people here, U.S. military employees of every faith gather daily to pray. Read more: https://www.washingtonpost.com/religion/2019/09/10/an-unsung-hero-attack-muslim-engineer-who-rebuilt-pentagon-crash-site-chapel

View the names of those who lost their lives: https://names.911memorial.org
Visit the 911 Memorial at the foundation of the original Twin Towers, in NYC: https://www.911memorial.org

Thanks for reading and we welcome comments below.