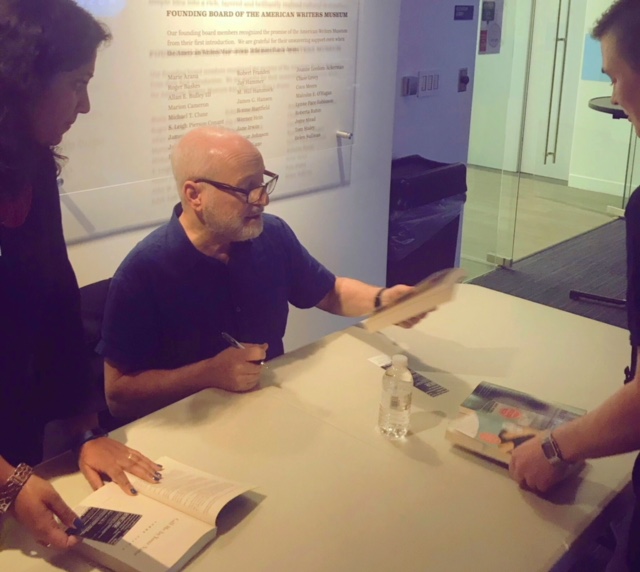 Fresh Perspective with Call Me By Your Name
This week I’ll turn to inspiration from The Oscars and the books where the story began.
I went with some Chicago writer and gay guy friends to the reading and discussion with Call Me By Your Name author Dr. Andre Aciman.
Dr, Aciman is a Sephardi Jewish writer, raised in Alexandria, Egypt, and all over the United States, and he shared with us the fact that he does not identify with one nationality. He is currently distinguished professor at the Graduate Center of City University of New York, where he teaches the history of literary theory and the works of Marcel Proust, and promotes the love of the literary canon. He is the author of several novels, including Call Me by Your Name (winner, in the Gay Fiction category, of the 2007 Lambda Literary Award). As we look close at this story and at inspiration for entrepreneurs, keep these ideas in mind:

LESSON #1: Make time to watch and empathize with a perspective that may be different from your own– Can you empathize with the universality of love when it appears in a relationship different than your own values?

LESSON #2: Condone a divergent choice– Can you excuse a conflicting path in a relationship different from your own inclinations and preferences?
To combine both of those lesson points, are you willing to recognize love to be love no matter what? Welcome to the perplexing quandary of Dr. Aciman’s book, now an Oscar-nominated film by Luca Guadagnino. Call Me By Your Name may be the most challenging book you read or film you see this season.

The book takes place during the summer of 1983. Elio Perlman (Interstellar andLady Bird actor Timothée Chalamet) is a 17-year-old Jewish-American living abroad with his parents among the peach and apricot orchards in the Cremona province of northern Italy.
Hear Dr. Andre Aciman, author of Call Me By Your Name talk about his best-selling book and inspiration at the American Writers Museum in Chicago: Here he creates the setting as “idyllic”:
https://youtu.be/1p8BjPiUQww
Nimble and growing in experience with the local girls, Elio is a well-read and highly talented young man on the edge of experience and adulthood. His father (Michael Stuhlbarg, in his third film of this Oscar season after The Post and The Shape of Water) is in Italy working as an archeology professor.
Mr. Perlman invites Oliver, played by the top-billed Armie Hammer, a graduate student and fellow Jew, to spend the summer living with his family and assisting with the academic and project work.

Oliver is a tall drink of water and a strapping bock that wears a hint of arrogance as well as his Star of David necklace and trendy Converse shoes. Confident and athletic, Oliver is a head-turner on the dancefloor or out of the spotlight.
At his parents’ request, Elio is charged with playing tour guide and summer pal for Oliver. Elio initially loathes Oliver’s presence and stature only to feel his ignorance turn into interest and desire, a progression reciprocated by Oliver as well.
Call Me By Your Name features tenderly audacious performances from the three main men. Channeling his matinee idol charisma into unrestrained passion, Armie Hammer continues to improve as a dramatic actor. As the supportive father, the exquisitely soothing Michael Stuhlbarg delivers a heart-to-heart speech for the ages that is beyond poignant, but possibly too little and too late into the film.

The catalyst for every nuance and development is the multi-talented Timothée Chalamet. The 22-year-old bears a heavy emotional burden of creating a build of confidence against awkwardness. He brilliantly portrays the sways between confused fragility and awakened sexual intensity. If trends continue, the young man may very well become the youngest winner of the Best Actor Academy Award.
Extended from the acting, the artful lushness of Guadagnino’s film cannot be questioned. The ethereal music from singer-instrumentalist Sufjan Stevens rises as third voice of romantic expression putting words to unspoken monologues that could be swimming in the thoughts of Elio and Oliver.

The camerawork from Thai director of photography Sayombhu Mukdeeprom is sunny and vibrant in every frame.
No matter the charm and beauty, what can be questioned is the connection. Circle all of the emotionality back to the opening essential questions. Your tolerance is the key to connecting to Call Me By Your Name. Your comfort level for the homoerotic summer romance being woven and your acceptance of the controversial age difference within this narrative are everything. Either of those two qualities could be easily ignored obstacles for some or a no-go hang-ups for others.

Dr. Acimen spoke of the story with affection and conviction. When he began thinking about writing a story that took place in the luscious Italian Riviera he did not know that the characters would be gay. Even he was drawn in by the romance and possibilities as the story began to take shape.
Guadagnino’s film does not make a compelling enough case for both essential questions to be easy and affecting yeses. Take time this week to let a fresh perspective and universal truth wash over you and let some light in.
Thanks for the excitement and support on my Instastory from the discussion, @AlfonzoWords, @NathanielGrey & @Mikaelachetty were outstanding with spreading the news and comment on the video. Catch my story on the #CMBYN discussion: