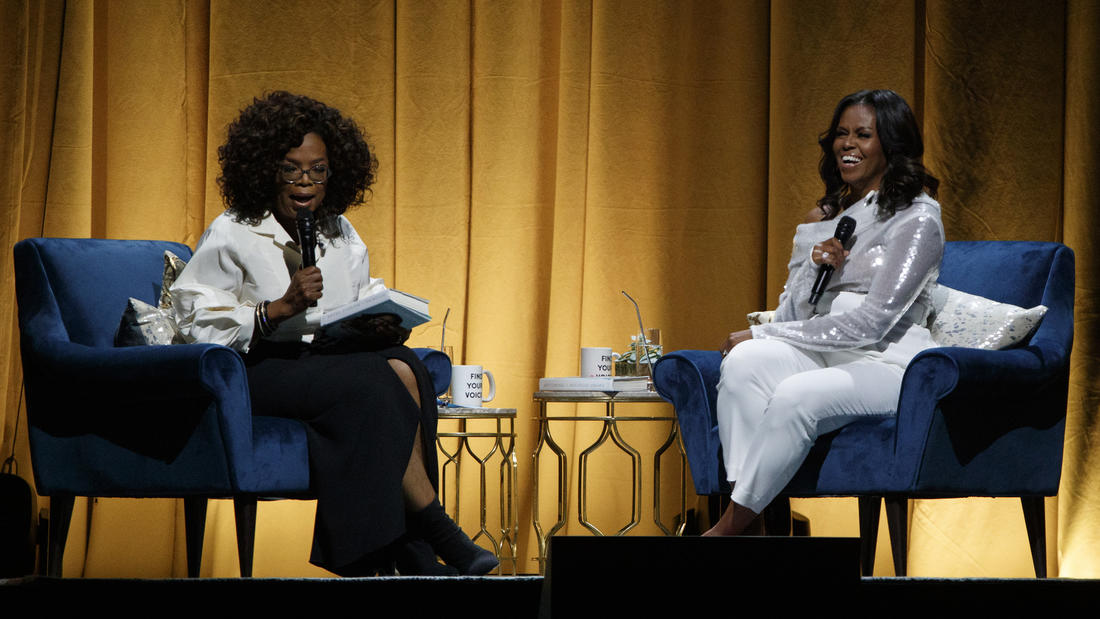 “There will be people who set the bar so low, not even knowing who you are,” Obama told the audience, which included a healthy section of current Whitney Young students. “They don’t go away. Just because you become Oprah Winfrey or the president of the United States, they are still lurking. The challenge becomes how do we listen to the good voices in our heads, because for most of us, we have those.”

Tell us how, Oprah Winfrey said…

Michelle Obama and Oprah Winfrey appeared onstage to discuss the former first lady’s book “Becoming” during the first stop of her book tour at the United Center, Nov. 13, 2018. I was honored to be there and soak in the inspiration!! (Photo and article: Chicago Tribune)

“What is the secret, or the information, you want women to most know about sitting in those rooms with powerful men,” Winfrey asked, “during a time when it feels like we’re at a tipping point for women in the culture?”

“Maybe they want us to think we don’t belong because maybe we belong too much,” Obama said. “There are some people who are taught that they are entitled to be there. And then we think that we shouldn’t be there — as women, as minorities, as poor kids, as rural kids, as first-generation kids. You know, we’re taught that our stories don’t matter. That we don’t belong.”

The truth is, she said, we do. And the truth has to lead us.

“At every table I got to,” she continued, “I was like, ‘I do belong here. And I do have something to say.’”

“Don’t silence yourself”, she told the audience.

“Our fear that our story doesn’t matter, it chokes us,” she said. “It keeps us silent because we’re afraid of putting ourselves on the table because we think we’re not worthy, so we don’t add value when we’re at these tables because we’re too busy hiding. And I’ve learned that my story does matter.

“I love my story. It is the American story. My struggles. My journey. My life on the South Side of Chicago…”

Read on to learn from the journey:
https://www.chicagotribune.com/lifestyles/stevens/ct-life-stevens-wednesday-michelle-obama-oprah-1114-story.html

We also pay homage to Stan Lee who passed this week. My blog focused on a lot of things he did right with Marvel, which is another great brand story:
http://thewishwall.org/desideri/future-entrepreneurs-heroes-fighting-hate

Thank you for reading and we wish you the best on your path as an entrepreneur.
We welcome your comments below.