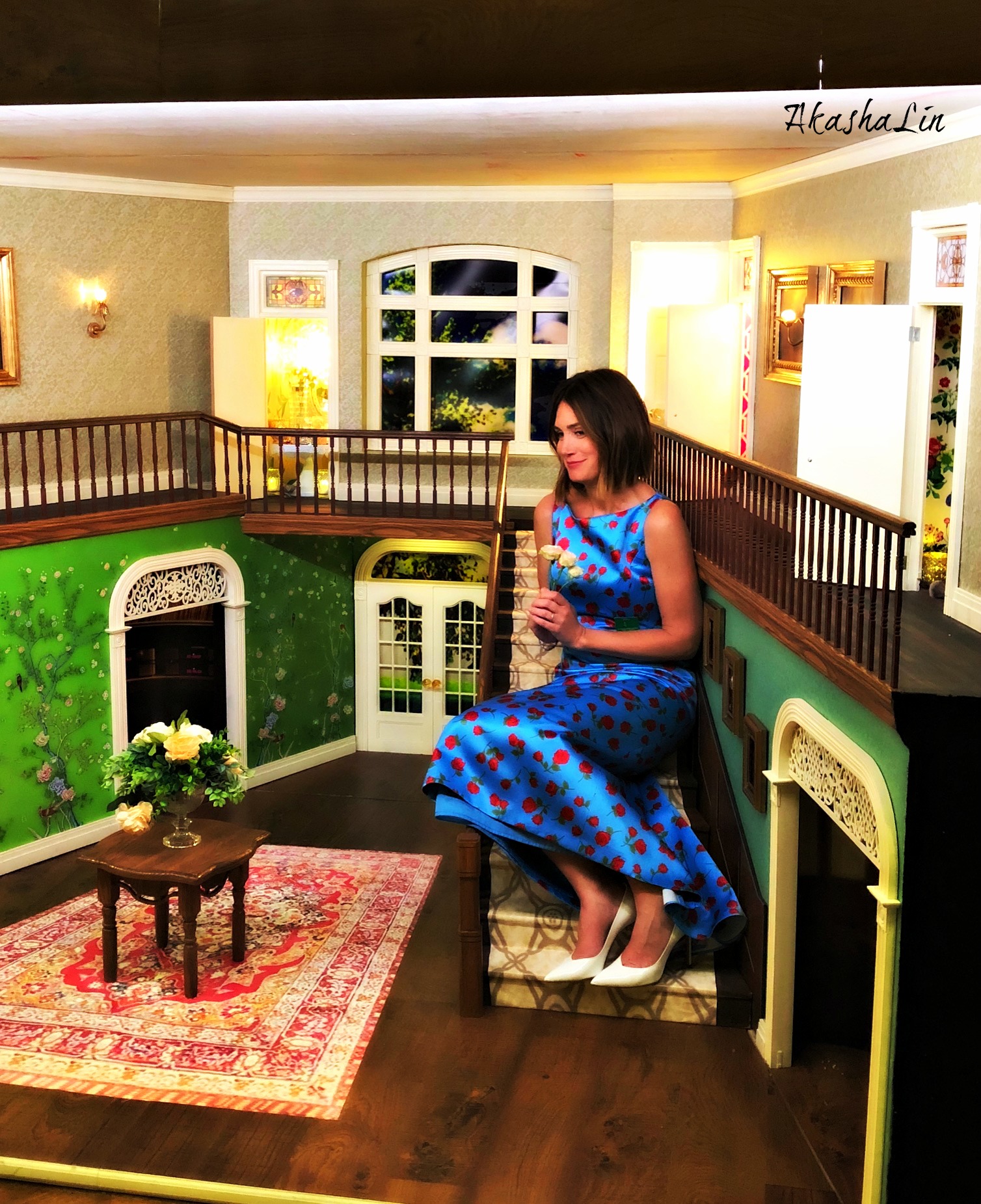 “The face you give the world tells the world how to treat you.” ~Gillian Flynn, from Sharp Objects

Happy Screenwriters’ Day to fellow screenwriters and to all those working on their scripts!
Today we’ll honor top female screenwriter, Gillian Flynn (even caught on film in a life-sized doll house!). Last time I talked with Gillian Flynn in person was pre-pandemic on a perfect sultry summer day at the “Sharp Objects” premiere and party at the Chicago History Museum. I’ve been talking to HBO all week about this and some other intriguing ideas. I stepped up tonight to support Gillian Flynn, the top female novelist, screenwriter and the fact that women’s stories are getting told and made. I’ve read the book again and made time for research and some smart and creative questions.
Sharp Objects is a Gothic story with cinematic settings and layers unravelling female violence, based on the novel of the same name by Gillian Flynn http://gillian-flynn.com/ and adapted for TV by Marti Noxon. The series follows Camille Preaker (Amy Adams, who also served as an executive producer), an alcoholic reporter recently released from psychiatric care who agrees grudgingly to return to her small Southern Missouri hometown (“Wind Gap”) at the urging of her editor to cover the brutal murder of a young girl and the disappearance — and murder — of another. The murder mystery spins its web with small town history and stereotypes, but goes deeper to uncover abuse and the lingering effects of psychological and physical trauma.
Gillian Flynn spoke about the importance of not losing Camille in the mystery or horror. It is her story and could have been glossed over in a film treatment. The portrayals and webs work whether you’ve read the book or not.
Viewers learn that Camille’s younger sister Marian passed away from an enigmatic illness when Camille was a teenager. This in addition to the psychological and emotional abuse she suffered at the hands of her mother Adora (played with icy enthusiasm by Patricia Clarkson https://www.imdb.com/name/nm0165101/), has affected Camille to the point that she self-harms by carving words into her body to cope. There’s a scene where Camille buys a sewing kit and uses it in the traditional sense, but her affliction is far from on the mend. She’s done it for so long that her body is covered in stunning white scars she keeps hidden beneath dark clothing she sheds only when alone. She shows the world a pretty face and must confront image of the young woman and reputation she wore in this small town. Camille’s memories of traumatic childhood come rushing back unabated once she crosses the town line and reenters the place so much went wrong. As she looks to uncover answers and interviews townspeople, Camille is haunted by visions and dreams of Marian and of the life she led before and after her death. These flashbacks are effective and haunting when spliced into the action of the present day in such a way that it calls to mind the quick way ghosts of memories long forgotten flit to the front of our minds without warning, before dissolving into current reality.
Opening doors to darkness, seeking the light
For those who’ve read Sharp Objects, it’s easy to assume the answers to these questions follow the book’s blueprint scene-by-scene. After all, Flynn is an executive producer for the HBO thriller. It’s not the case here where we explore new ground.
At the premiere we talked about novel adaptations. I had my chance to talk with Gillian about the Writers Museum thriller discussion and the importance of women’s stories. I am an author and produced screenwriter, and I’ve interviewed Gillian before, so I accepted HBO‘s invitation for the red carpet and press pass. Gillian was enthusiastic when I congratulated her and mentioned I was there to highlight and cover women’s stories as a female member of the press.
Gillian admits that she was a different person in 2006 and that was the book she could write at the time. She was somewhat shy about it at first but came to accept and embrace it. When the book was first finished Gillian mentioned that there were “crickets” and not many people were interested in publishing or reading it. Now the world has embraced Gone Girl in book and film form, so doors have opened for Gillian on what she does next. The time was right for Sharp Objects and for telling stories about women as real: with anger, fear and ghosts.
Motivation for writers
This conversation came up as a favorite of mine. I have written my own journey tale on the importance of believing in your story, Secrets to Shine through the Noise. We continue to motivate other writers and followers with weekly prompts. My favorite answer came from Alfonzo Words’ question that I share with Gillian:
“If there’s one nugget of wisdom you could share, what would that be?”
Gillian raised her eyebrows and answered: “It’s just so important to keep going! You have to get to that first full draft – pf the novel or screenplay. You have to see what you have and where you are. You can’t do that with fragments. And when you do finish that draft, it is…GLORIOUS! Now you can see what needs to be tweaked and that makes editing possible. So keep at it to get to the draft. It is so worth it!!” I smiled and said I’d be happy to share,
Believe her. Gillian Flynn also talked about the importance of treating each story as separate intellectual property and negotiating individually for novel, screenplay and series. This has continued to pay off and inspired me too as I negotiate in 3 areas.
Gillian and I said cheers until next time as she was whisked on to a discussion with her LA and New York agents.
Catch “Sharp Objects” is on HBO: https://www.imdb.com/title/tt2649356

I have heard that cutting is an issue in schools now, so if you or someone you know is considering self-harm, please get help. Call the National Suicide Prevention Lifeline at 1-800-273-8255.

Thank you for reading and welcome your comments below.