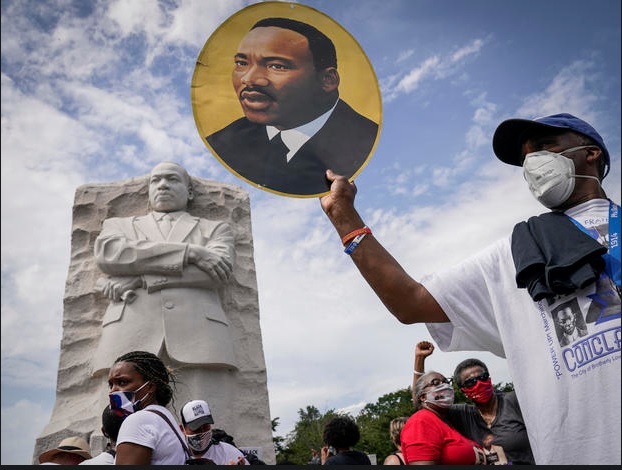 As we honor Dr. Martin Luther King Jr. this year, I feel we’ve gained a fresh perspective and see the need for continued hope and faith. Many of us were not alive during his time, but his message rings true. Our Future Entrepreneur blog has honored Dr. King and #BlackLivesMatter over the last 3 years. I wish to share more of the intersection we see this year.

I shared my POV here when my college town became the epicenter with George Floyd and we’ve honored several other messages and passings that came too soon. One of the main former Minneapolis police officers involved in his death will stand trial in March 2021; the others are slated for trial in August 2021. http://thewishwall.org/desideri/justice-peace
We heard congressmen and women unite against insurrection at the U.S. Capitol last week. I write this tribute in unity with our black brothers and sisters and Dr. King’s message, with a look at those who marched 57 years later…
https://www.cbsnews.com/pictures/57-years-after-martin-luther-king-jr-s-i-have-a-dream-speech-thousands-converge-in-d-c-for-another-march-on-washington/9
And a look at a snapshot in history expanded in to the newly released ‘MLK/FBI’ film.
There’s an iconic photo of Rev. Martin Luther King Jr. taken as he triumphantly boarded one of the first integrated buses in Montgomery, Alabama.
It was 1956 and King looks out a window, firmly at the front of the bus, almost gazing toward his movement’s next big social hurdle. The image was taken by Ernest Withers, a key chronicler of the civil rights movement—and an FBI informant. Read more about the film:
https://www.chicagotribune.com/entertainment/sc-mov-mlk-fbi-review-0113-20210113-ttkcue5ujnb4zoobemwsggu77u-story.html
Thanks for reading and we welcome your comments below.
Read more from:
Future Entrepreneurs – Mentorship up and coming – The Wishwall