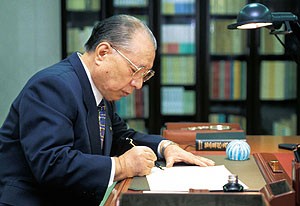 01 May Equal Rights For Women – By Daisaku Ikeda

Equal Rights for Women: Moving toward a Creative Partnership (The Japan Times, Jul. 13, 2006)

From a 12-part essay series by Daisaku Ikeda carried in The Japan Times, a leading English-language daily published in Japan, from May 2006 through April 2007.
Valuing the wisdom and capabilities of women is critical to the development of any organization or society. Organizations where women are full, contributing participants are open and energized by a wide range of opinion and approaches. This is clearly apparent in the business world, where trends show that corporations that actively embrace diversity are more creative, responsive and profitable.

Embracing diversity does more than assure the protection of individual rights. Bringing together the intelligence and perspectives of a wide range of people unleashes new creative energies, enabling society as a whole to move forward in a richly harmonious manner. In this sense also, empowering women is crucial.

Women would appear to be particularly adept at bringing a patient, focused and flexible approach to resolution of complex problems. The economist and activist Dr. Hazel Henderson has brought just these skills to bear on the problems of organizing to protect the natural environment.

Henderson was, in her own words, “an ordinary housewife” when a seemingly small incident changed her life. This was in the 1960s and she was living in New York City. One day her young daughter came home with soot on her skin that no amount of scrubbing would remove. The air around them, she realized, was terribly polluted.

Moved by the simple desire for her child to breathe clean air, she began speaking with other housewives in the neighborhood, often opening with the simple question, “Don’t you think the air here is bad?” Her efforts at one-to-one dialogue gave rise to friendship, trust and a growing circle of solidarity.

She started using the time during her daughter’s afternoon naps to write letters to the mayor and other city officials. After some time, she received a response from the mayor suggesting that what she thought was pollution was probably just “mist rolling in from the sea.” Undiscouraged, she continued her research until she found that the city actually kept daily measurements of soot particles in the air. She lobbied TV stations and other media, eventually getting them to include the New York Air Pollution Index in their weather reports.

Henderson questioned models of economic growth that justify destroying the natural environment. She initiated efforts to challenge and change these. But politicians and the so-called experts refused to take her seriously. Because she repeatedly lobbied large corporations and the government on a range of related issues, she was lampooned as “one of the most dangerous women in America.” Letters criticizing her were sent to her husband’s employer. She was subjected to humiliating ridicule: What could a housewife who hasn’t graduated from college know about the economy?

Spurred by such critiques, she intensified her efforts to educate herself in economic and ecological theories until she could hold her own in debate with world-famous scholars, clearly saying what needs to be said. Her courage and conviction were pivotal in enabling other women to find their voice.

Citizens for Clean Air, which she founded with her neighbors, was one of the pioneering groups in the environmental movement. Important legislation was passed. The way people think and the way companies and government operate was changed forever.

Henderson focuses on the concrete realities of people’s health, safety and happiness, rather than empty abstractions. This is why she is never distracted or thrown off course. With persistence like the steady, ceaseless flow of a river, she always sees things through to the end. As she recalls: “Since we knew what a big task bringing children up is, we were anxious for our children to have the best futures possible.”

Because hers is a “life-sized” approach–rooted in the realities of daily living and issuing from the fundamental desire to protect and nurture life–Henderson’s message has resonated widely among people concerned about the future. This kind of gradual transformation amidst the continuity and consistency of daily life stands in sharp contrast to the violent upheaval of revolution by which men have so often sought to effect change.

Throughout history, men have paid too little attention to the views and efforts of women. And we have all paid the price for this arrogance in the form of a world of constant conflict, a society that is, at best, challenging to live in.

As Henderson puts it with a generous laugh: “Women today are engaged in cleaning up the problems created by men, just like they clean up the dishes!”

The wisdom and power of women–their attentive commitment to reality, their care and concern for the people in their immediate surroundings, their capacity to treasure life itself–must be fully reflected throughout society. Only then will we see solid progress toward the resolution of critical global problems and realization of peace. To this end, a revolution in men’s consciousness is absolutely essential.

At the same time, I am reminded of these words of Eleanor Roosevelt, who played a key role in drafting the Universal Declaration of Human Rights. Writing in the dark years of the 1930s, she asserted:

“If ten million women really want security, real representation, honesty, wise and just legislation, happier and more comfortable conditions of living, and a future with the horrors of war removed from the horizon, then these ten million women must bestir themselves.”
Dr. Henderson expressed to me her hope that the 21st century will be an era of partnership between men and women. I fully concur. Women and men should work together in relations of mutual respect to forge a new path for future generations. Together we can create an era in which all people are valued for their humanity, as unique and irreplaceable manifestations of life. This will be an era in which we will all enjoy the full richness of human diversity.