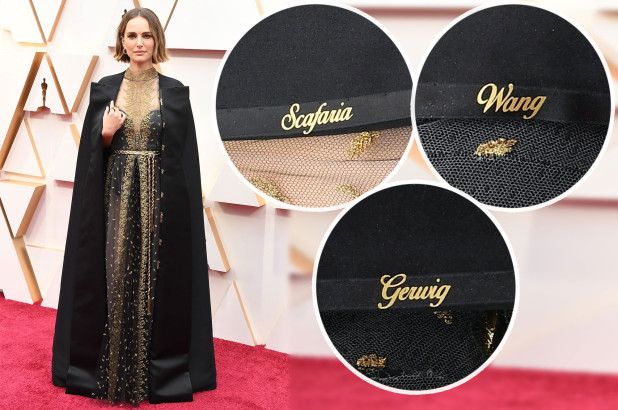 Oscar Sunday 2020 started with rain, but brightened my day as it launched a new era for the 2020s. I wish to share the highlights from the biggest award winners, to the most-talked about red carpet moments, and what you want to know about from the Oscars 2020.

Natalie Portman made a feminist statement on the red carpet
Natalie Portman embroidered her Dior cape with all the female directors who weren’t nominated for #Oscars. “I wanted to recognize the women who were not recognized for their incredible work this year in a subtle way,” Portman said on the red carpet. The women directors on her cape are: Lorene Scafaria (Hustlers), Lulu Wang (The Farewell), Greta Gerwig (Little Women), Mati Diop (Atlantics), Marielle Heller (A Beautiful Day in the Neighborhood), Melina Matsoukas (Queen & Slim), Alma Har’el (Honey Boy), and Céline Sciamma (Portrait of a Lady on Fire).” Check out her full explanation here.
https://www.vox.com/the-goods/2020/2/9/21130751/natalie-portman-oscars-cape-women-directors-the-academy .
“Once Upon A Time… In Hollywood”’s Julia Butters brought the best accessory to the red carpet
Actor and smart cookie planned ahead and enjoyed sharing the surprise in her bag … a pre-packed turkey sandwich!
“There is a sandwich in my purse,” 10-year-old Butters told interviewers on the Oscars red carpet.
“The other awards, I was hungry, I was starving, and sometimes either they don’t have food or I don’t care for the food.”
See the Oscar 2020 red carpet looks here:
https://www.eonline.com/news/1119857/oscars-2020-red-carpet-fashion-see-every-look-as-the-stars-arrive

The 2020 Oscars seemed to be striving to self-correct errors from the film nominations and messages. The show picked the perfect twist for its dramatic finale. The 92nd Academy Awards made history by giving best picture to “Parasite,” a Korean film from director Bong Joon-ho. The film was the first South Korean film to be nominated (and win) best international feature film (newly renamed from best foreign language film). To top it off, in a triple upset, “Parasite” took home “Best Original Screenplay”, “Best Director” and “Best Picture”, historic wins across the board.

The “Best Picture” win is the show’s biggest headline, and deservedly so. It wrapped an Oscars ceremony that seemed to be acting contrite about its front-runners, in a production that felt like it was trying to overcome the narrative its own voters created.
Going into the 2020 Oscars, the nominations had caused plenty of frustration. In a year when women directed a number of high-profile projects and top grossing films, the academy once again nominated an all-male slate of directors. “Joker,” an incoherent, self-indulgent paean to white male rage led all films with 11 total nominations. It was followed by a three-way tie, with “Once Upon A Time In Hollywood,” “1917”and “The Irishman” earning 10 nominations each. Like “Joker,” “Once Upon A Time” was a fantasy that suggested the world might be a better place if white men were allowed to be mindlessly violent. The latter two were so male-centric as to lack any sort of women’s roles at all. (Was it only a man’s story throughout World War 1? I enjoyed “1917”, the story and the cinematography that moves it along. Unfortunately, it fits with the female role slight)

“The Irishman’s” lead actress, Anna Paquin, had so few lines in the three-hour epic, you could count them on two hands. The imbalance was easy to spot when looking at the best actress and best supporting actress categories, both of which had to draw from a completely different slate of films.
It was quite the message for Hollywood to project. Faced with stories about people of color and women, the Academy decided the stories most worthy of accolades were the ones that erased women. For all the praise heaped on “Parasite” — it won the Cannes Palme d’Or with an unanimous vote earlier in the year — the best director and best picture nods merely felt like indicators it was a lock for best international film.
Janelle Monáe opened the show in with an eclectic musical number/Mister Rogers-Themed Performance. The musician took the stage at Hollywood’s Dolby Theatre to pay tribute to the beloved TV icon. Opening the show with a colorful, playful rendition of ‘Won’t You Be My Neighbor’ from “A Beautiful Day In The Neighborhood”. Monáe also said, “Tonight we celebrate all the amazing talent in this room. We celebrate all the women who directed phenomenal films.
Brad Pitt took home his first acting Oscar
He’d previously won as a producer on the Best Picture winner “12 Years A Slave”, but in winning the Supporting Actor role last night for his role in Tarantino’s Once Upon A Time In Hollywood, he took home his first acting gong from the annual ceremony. “This is for my kids, who color everything I do,” he said, accepting his award, “Once Upon A Time In Hollywood, ain’t that the truth?”
Laura Dern scooped the award for Supporting Actress
‘Twas a stellar night for Dern, who can add the Oscar to her BAFTA, Golden Globe and SAG Award for her supporting role in “Marriage Story”.

Elton John performed Rocketman original song nominee “(I’m Gonna) Love Me Again”, then won for Best Original Song
Sir Elton John took to the Oscars stage to accept the award, saying, “This is a dream for us, we’ve never been nominated for anything like this.” And it also made Elton John’s annual Oscars afterparty THE place to be following the awards, if it wasn’t already.
“Parasite” took home the award for the newly-updated Best International Feature Film category
Director Bong Joon-ho said: “The category has a new name, from foreign language to best international feature film, I’m so happy to be the first recipient under the new name… I applaud and support the new direction this change symbolizes. He went on to add, “I’m ready to drink tonight.”
Despite being one of cinema’s most iconic auteurs, Tarantino has never won a directing Oscar. Winner Joon-Ho praised his fellow nominee Martin Scorsese in his acceptance speech.

Renee Zellweger won ‘Best Actress’
“I feel so proud to be in your beautiful movie,” Zellweger said, thanking her fellow Judy cast and crew following her win for Actress In A Leading Role, for her role as Judy Garland in the biopic.
See how other highlights enhanced the show

 Sparks fly as Diane Keaton and Keanu Reeves improvise a Something’s Gotta Give sequel while presenting the award for Best Original Screenplay. The two banter their way to announcing Parasite’s win, with Reeves blushing harder and harder as Keaton asks him if he “remembers her” and shares that they “frankly had a good time” during filming. Though Keaton’s playwright Erica and Reeves’s hot doctor Julian don’t end up together at the end of Nancy Meyers’s film, even Meyers herself couldn’t help but wonder if, in some other universe, they may have!

 “Jojo Rabbiit” Taika Waititi dedicates his Best Adapted Screenplay Oscar to “all the indigenous kids in the world who want to do art and dance and write stories. We are the original storytellers, and we can make it here as well.”

 Bong Joon Ho gazing deeply at his Oscar statuette while his collaborator Han Jin Won gives his half of Parasite’s Best Original Screenplay speech. He’s just having a nice time at the local awards show.
The enthusiasm for Parasite’s Best Picture win is so intense that the audience — led by the rapscallions Tom Hanks and Charlize Theron — cheers for the theater to turn the lights back on and bring back the microphone to let the Parasite team finish their speeches. Something good is happening when the show’s running late and the people demand more.

Honorable awards’ season mention: Adam Sandler won “Best Actor” at the 2020 Sprit Awards for “Uncut Gems”. His speech is clever and fierce, and the perfect way to shine through the noise of an Oscar snub! https://www.rollingstone.com/movies/movie-news/adam-sandler-independent-spirit-awards-acceptance-speech-949890/
Catch the full Oscars winners list: https://oscar.go.com/winners
See how the 2020 Oscars compared to the 2019 Oscars:
http://thewishwall.org/desideri/oscar-winners-shine-through/

Ready for one more dose of inspo to help you ramp up for your breakthrough?! Voila, read more from Future Entrepreneurs:
http://thewishwall.org/future-entrepreneurs
Thanks for reading and we welcome your comments below.
Akasha Lin
Akasha Garnier for #TheWishwall
Author, Brand Expert, Filmmaker
http://www.akashagarnier.com
#ShineThroughtheNoise